Going West or dancing with the puffins

The Icelandic Westfjords are a speciality on their own. I have never seen anything like the Latrabjarg bird cliffs. But this to come later. Driving with our small car on pretty adventurous gravel roads took us quite a while to arrive at the westernmost point of Europe. Although honestly, the true reason to arrive at Latrabjarg by 23:30 o’clock, was more my burning eagerness to jump out of the car every few meters to capture pictures of the amazing scenery. 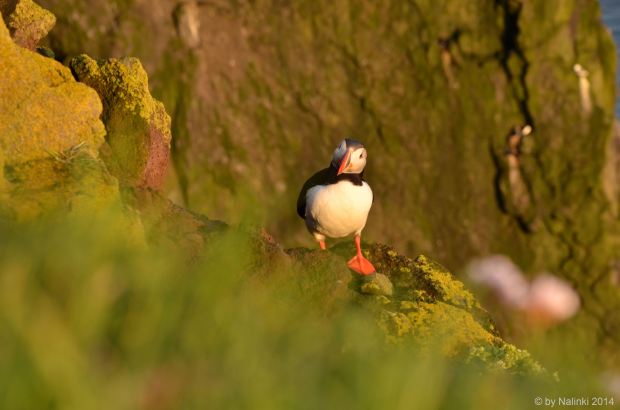 First, we took a ferry from Stykkisholmur to Brjanslaekur. Beginning of June the ferry was still on its winter schedule. Nevertheless, being on tour with a hardcore fan of everything that is floating or similar to a ship or harbour, my chances of staying in the warm ferry area was close to zero. After almost 4 hours on deck, I was shivering and freezing although already wearing 2 pullovers, scarves, gloves and jackets. A hot cup of coffee at our hotel in Patreksfjördur was my live saver. Soon defrosted, I was up to seeing more. A windy road lead us to the red beach of Raudisandur where the light shifted from red, orange to golden. Several hours later, driving and walking through deserted lava fields and wilderness and picnicking on lonely beaches, we finally saw the steep cliffs and literally hundreds of birds sitting, flying, sailing all around us. Actually, we turned out to be lucky by coming to the end of the European world (geographically seen to the western end) late in the evening. The midnight sun made the stunning cliffs with hundreds of colonies of sea birds even more touching.The cutest puffins were jumping right in front my lens. At this fascinating place, you just need to take care that you do not fall of the European edge while watching the sky and birds around you.

← Bunny Warhole Style
One day in the life of a cat →