End of October, the weather became wet and cold. On the weekend, I could already feel winter’s moist breath and chilling breeze. Spending some cosy time on the coach, strolling randomly through the web, I read some articles in regard to Austria’s national holiday. I came across one of these popular “10 things… lists” on what not to tell an Austrian” that hit some of the yodeling and schnitzel stereotypes to the point. So far, I have written about distant countries and cities. With Halloween already knocking on our doors, I thought the time has come to shed light on my city and its clicheé towards morbidity.

Vienna is reputed to have a peculiar close and bizarre relationship with death. The obsession with morbidity reaches its summit in fall when fog and mist set up the perfect atmosphere. You might think that people are suffering from winter blues engulfed by depressive feelings. Far wrong, Vienna’s morbid attitude is determined by cheerful serenity and looking at death from the bright side with a tenor of grumpiness. (Slight grumpiness is a general trait of Viennese people, especially pronounced in waiters, but this is another story). During All Hallows, cemeteries in general have highlife. But here, a cemetery not only represents the last home of the deceased but a calm and silent place, a retreat to think, process and walk, a shelter for animals living in their urban habitat. The cemeteries are full of anecdotes, well-kept secrets, conspiracies and history that live on in the people wandering through them. 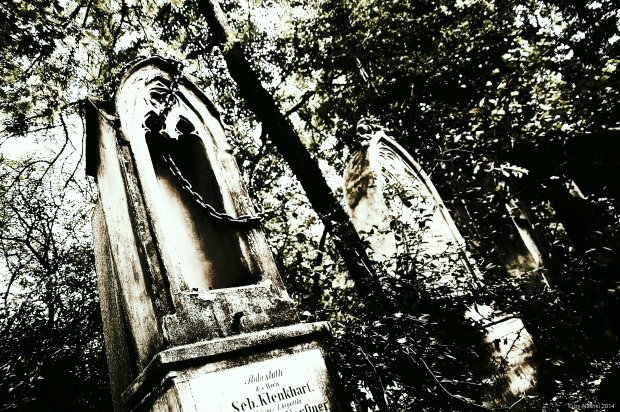 The around 50 cemeteries in Vienna are beautiful. Some are hidden parks surrounded by hedges like in Grimm’s fairy tale of sleeping beauty. Just imagine the hedge of thorns flourishing in summer, tendrils and leaves entwining around old grave stones in fall. Others look like well-kept parklands with large green spaces, trees and various historical monuments. Every season attracts tourists as well as locals to take a relaxing walk in the silence of the graveyards visiting graves of famous musicians, monarchs and poets.

However, the cemeteries are not the only attraction in regard of obscure morbidity.  Various terms and songs illustrate the Viennese oddity: “beautiful corpse”, “Death must be a Viennese guy”. A famous austro-pop song is an ode to the anniversary of Vienna’s central cemetery (“Es lebe der Zentralfriedhof, W. Ambros). If you like museums, you should definitely visit the Funeral and Coffin Museum where you can try out lying in a casket. While staying in Vienna, everyone takes a glimpse at the city’s morbid side. Everybody has one foot in the grave, but unremarkably keep on cheating death.